I’ve always been inspired by the parable in Matthew 20:1-16 of the workers in the vineyard. It is a great encouragement to see how, throughout the ages, the great “landowner” has been pursuing His purpose of sending out workers into

Great missiologists, like David Bosch in his classic book “Transforming Mission”, have seen different paradigms of mission throughout the ages. Here is a brief summary of the 6 different periods of mission – with a few comments and verses to sum up some of the essentials of each age:

So for Bosch, the “emerging ecumenical paradigm” or “post modern” period would perhaps equate to our “eleventh hour” in the parable.

God is raising up new missionary armies from the four corners of the earth to facilitate the task of gathering the harvest. A prophetic word given during a prayer vigil held in Jerusalem in May 1989 over Pentecost gives an encouraging confirmation of all that is in God’s heart for the last days.

“Today is the time of harvest and ingathering, a time when the Spirit is being poured out upon all flesh in these last days… Through the centuries he has called workers into his fields and has promised that they are worthy of their hire… These have indeed borne the burden and the heat of the day. And still, the harvest is not finished.

Now, the Lord says, I will send to work at your sides eleventh hour workers, those who have been idle because no man would hire them… This army of workers will be mostly young people who will go forth to proclaim the gospel without fear or compromise … They will come from the nations and peoples that you least expect. They are a great company that you do not know at this time, but the Lord is preparing them even now…

You must pray for and welcome these eleventh hour workers that I will give to you. You must not be jealous of them but rejoice at the reward that I will give them – for they were willing to come at the last hour – and without them the harvest would not be complete …”

All encouraging stuff…but the reality of the eleventh hour seems to be a bit more challenging. Sometimes we find it so hard to break out of the beloved “paradigms” of the 8th, 9th and tenth hour. The wave seems to be coming to an end and we find it hard to catch the new one!

I was recently teaching at a well-known Bible school who had only a very few students while many mission agencies are reporting record low numbers in candidates and immense financial challenges. I know that this is not the same story everywhere, but there seems to be a mismatch between the present needs and the available workforce. At the “eleventh hour” the workers were abundant…but redundant!

“Why have you been standing here all day long doing nothing?”

Their reply is perhaps God’s word to us at this time.

“No-one has hired us”

No context had been created to link the tenth hour to the eleventh – a “paradigm” shift is needed.

We are called to create a context for the next generation of young eleventh hour workers.

I can think of three pioneer areas which might begin to knit together a context to release the full potential of these end time labourers.

No easy answers on the above, but the fundamental factor for every worker will be the privilege of bearing, “the burden of the work and the heat of the day”.

Our reward is the sharing in the sufferings of Christ himself and also in His glory. (Romans 8:17). If we lose sight of Him, our portion, we will quickly slip into legalism and grumbling. The work will become heavy and joyless rather than a glorious celebration of Christ’s ultimate victory over sin and death. Christ Himself was the first and last (Revelation 1:8), the first worker at the Father’s side in creation and the last worker returning for the heavenly harvest. He fills up each hour with his life and gift of himself. To see who truly bore the burden of the work and the heat of the day we need only to look to that naked figure nailed to a wooden cross under the hot Palestinian sun, bearing the sin of the world and the heat of hell upon his shoulders. No grumbling for him! Rather the glad accomplishment of the heavenly mission.

“For the joy set before Him, he endured the cross and scorned its shame.” Hebrews 12:2

His joy was seeing the army of workers who were being raised up to follow him. His joy was in the emerging missionary communities – the African, Brazilian, Chinese or Korean missionary armies. His joy is in us! Perhaps we feel last as a person or a nation, but God wants to make us first in our desire to witness and glorify Him. We may be the last in a long history of missionary movements but perhaps we may be the first to usher in the return of the King!

“…The last will be first, and the first will be last.”

A few years ago my wife was pregnant with our third child. As the bump grew bigger I asked the Lord to give me a prayer of blessing for the child. I laid hands on the yet unborn child and heard the Lord give me the verses from Mat 20. Could there be a greater blessing or privilege than being a worker for God and inheriting the glory of Christ.

“Oh God, please may there be some work left for her as she grows up! Give her the joy of serving you!”

My daughter is now 22 and finishing a business degree. In the same way may he give the emerging nations of this world, may he give you, the joy of being eleventh hour workers in his harvest!

Gather the fruit and enjoy… 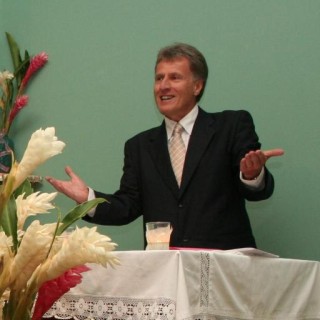 Impacted by an encounter with the divine in my life and filled with a passion to write, I offer these simple meditations for any who may be encouraged.